WHICH PARASHAH TO READ AND WHEN?


The bookmark with the printed second edition shows dates and readings for two years from September 2009 to September 2011.

The parashot are read in order beginning in the Jewish New Year period which starts in September and carries on into October. The first Genesis reading, Bereshit, begins on the Saturday following the eighth day after Tabernacles. There is a chart in the Appendix giving dates and starting days for the next few years.

The charts in order in the appendix are as follows:

For example, starting with the week beginning Saturday March 6, 2010, the reading is Parashah 21.

The feast of Passover occurs from March 29 to April 3 and the parashot readings are suspended in favour of Passover.

The Jews still celebrate Passover on its original date. Passover is what the church calls Easter and celebrates it a different time from its original
date.

Note that Parashah 26 does not appear until April 10 when the parashot readings kick in again.

There is a phrase Omer 1 in the parashah column. This refers to counting the omer from 1 to 49. Omer 50 is the day of Pentecost. This feast day is called the feast of Weeks (Shavuot) in the Bible but Christians renamed it Pentecost, which means 50 in Greek. I have put Easter and Pentecost in the calendar column so people can see that some church feasts are not in sync with the Bible times.

New Year begins on 9 September. The day is called the feast of Trumpets.
Ten days later is Yom Kippur.
Five days later is Tabernacles when thy build huts outside to eat in as part of the celebration. Foretells Christ's return to dwell with His people.

Jewish days begin in the evening. (It explains that Passover Eve is the actual beginning of the Passover when Jesus celebrated the Last Supper.

The Biblical Calendar is based on the phases of the moon. The feasts are
held on the same date each year but the day may vary. The lunar dates are
not in sync with the solar calendar which we use.

In short, there are three feasts in one week:

There are three feasts at Jewish New Year:

To make it easier for you, please go to the Weekly Readings page which I will try to keep you to date for you; or visit The Emmaus Guide, or use the search box, all of which are on this website, to help you find a reading.

There are also other web sites that give the weekly readings, such as: www.chabad.org/calendar and www.candlelightingtimes.org. 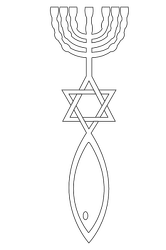 
Kevin D. Vincent, All Rights Reserved. Readers are free to print off individual pages for their own use but not to sell them to others.